A Garden Grows in Brooklyn

Last summer, my wife and I moved out of our apartment and home of five years in Williamsburg, Brooklyn, and relocated a few miles east to a neighborhood called Bushwick. At the time, this was a bit of a tragic event for us because we loved that apartment and the surrounding neighborhood dearly. The problem was, though, the landlords who also lived in the building were a duo of some of the most heinous assholes I have ever met and had the displeasure of having to interact with. For the sake of my blood pressure and the generally pleasant mood I am currently in, I will not elaborate on the frequent and sundry ways in which those two soulless, spineless pieces of rat shit infringed on our lives that ultimately caused us to break our lease early and flee the neighborhood. Instead, I will simply ask that you click on this link (after you finish reading this post, of course) to watch a two-minute video where Clark Griswald describes his feelings about his boss. His tirade at the end pretty much sums up our feelings towards the aforementioned fecal matter. Our thanks to you, Clark, for your impassioned eloquence on the subject.

Although I tend to be a glass-half-full type of guy, it does not take an optimistic outlook to recognize that this situation was an overwhelming blessing in disguise. As it turns out, Bushwick is vibrant community chock-full of amazing restaurants and even better artists who have painted beautiful and bountiful murals all across the neighborhood. The real kicker, though, is that we finally have something we have always coveted in an NYC apartment: outdoor space. Our spiffy new place came with two decently-sized balconies, which around here, feels like an embarrassment of riches. One of them we use to park my grill and my accompanying fat ass as I try to bring Southern porch culture to Brooklyn and the other one we waited all winter long to make it to some warmer weather so that we could plant a small “garden,” on it. By garden, of course, I mean a handful of flower pots scattered around on the floor and railings, but in the land of concrete, asphalt and assholes, a motley crew of seedlings in some plastic pots feels more like a garden than ever before.

Before I get down to rehashing our urban gardening experience thus far, I feel compelled to let you in on a little secret my wife and I share: we’re murderers. Not of humans or animals, exactly. I mean I have brought judgment upon many a mosquito and roach in my day, but aside from the pesky creepy crawlies, we have been on an impressive killing streak when it comes to plants. While I have a suspicion that the cause lies within the fact that, by our nature, we are cave people who do whatever we can to keep sunlight out of our homes, I’m just not sure. I can’t tell if plants need sunlight or not (mostly because I can’t see them within our dark confines), but it seems like every time I turn on our lights, I see that yet another plant has died. I mean, c’mon, I water them. What more do they want from me? Anyway, moving on.

Thank you for giving me the chance to get that confession off my chest and acknowledge my stunted nature and sheer incompetence when it comes to nurturing plant life. I feel better now. In light of this inconvenient truth, I was starting to question whether or not trying to plant a garden actually made sense by the time the snow had melted and spring was in full force. Nevertheless, I decided to give this whole urban garden thing a try and so a few weeks ago I picked up some seedlings for a couple different types of tomatoes, peppers, eggplant and herbs. Following the instructions given to me by the grower, I let the seedlings hang out in my apartment for a week and a half or so to let them get acclimated before making a few too many trips back and forth from the local hardware store to get containers and potting soil last Sunday. As it turns out, bags of dirt get pretty heavy after you schlep a couple of them down the street. Who’d’a’thunk it? The stares I was receiving from strangers as we were passing on the sidewalk were really starting to crack me up because their confused looks appeared to say “Holy shit, is that dirt?! I haven’t seen that in like ten years!” In reality, it was probably something closer to “Holy shit! How are those people still so pale this far into June?” As I said before, we’re cave people. That’s how.

If you’ve ever spent any time around me when the temperature is anywhere north of 40 degrees, you’ll likely have noticed that what my body lacks in metabolism, it more than makes up for in sweat production. This is all to say that by the time I got the potting soil back to my apartment, it was more like potting mud, but that sure wasn’t going to stop me. I mean, when the zombie apocalypse comes, I’m going to need to know how to make my own food, man! The time had finally come to take the leap of faith and transfer the seedlings from their tiny containers into the grown-up flower pots we just picked up. We laid down a solid foundation of potting soil into the bottom of the pots and then made some holes to place the root balls into. Each container was then topped off with a little bit more potting soil, some water and a whole lot of hope. We moved the pots into place and crossed our fingers, wondering if this new garden would soon become a graveyard.

I guess I should have seen it coming (especially since I have no less than three weather apps on my phone), but I didn’t. Shortly after we finished moving everyone into their pots and onto the balcony, a huge thunderstorm broke out and it rained like crazy all night long. It seemed that nature was intending to be a real swell pal and expedite the extermination process it had witnessed us attempt many times before. The rain had stopped by the time I woke up the following morning and so I peeked through the glass door to see how my plant babies had fared during their first night outside. The plants in the flower pots seemed to be in good shape, but the herbs I put into these long rectangle containers were completed flooded with water. I immediately grabbed a pocket knife and started stabbing the sides of the container like Roose Bolten did to Robb Stark at the Red Wedding, frantically trying to drain the containers as quickly as possible. At this point, I was pretty sure that I had already killed the herbs and that it was only a matter of time before the plants in the pots would get “theirs,” too. When I got home later that day, though, I was shocked to see that all of the plants were noticeably bigger in only 12 hours. Now a week later, all of the plants have doubled in size and look to be thriving. One of the tomato plants even has its first fruit! I am relieved, to say the least, and really excited to think that I might be able to eat a tomato in Brooklyn that actually has flavor. Only time will tell, I reckon. Check back later this summer to find out if this is a story of triumph and overcoming a troubled past, or the story of a man with a dark secret whose neighbors would describe him as “quiet.” In the meantime, though, check out the bacon wrapped jalapeño poppers recipe below. One of the veggies I am growing this summer is a jalapeño plant and I hope to be able to make these with my own peppers soon! Happy summer, ya’ll, enjoy. 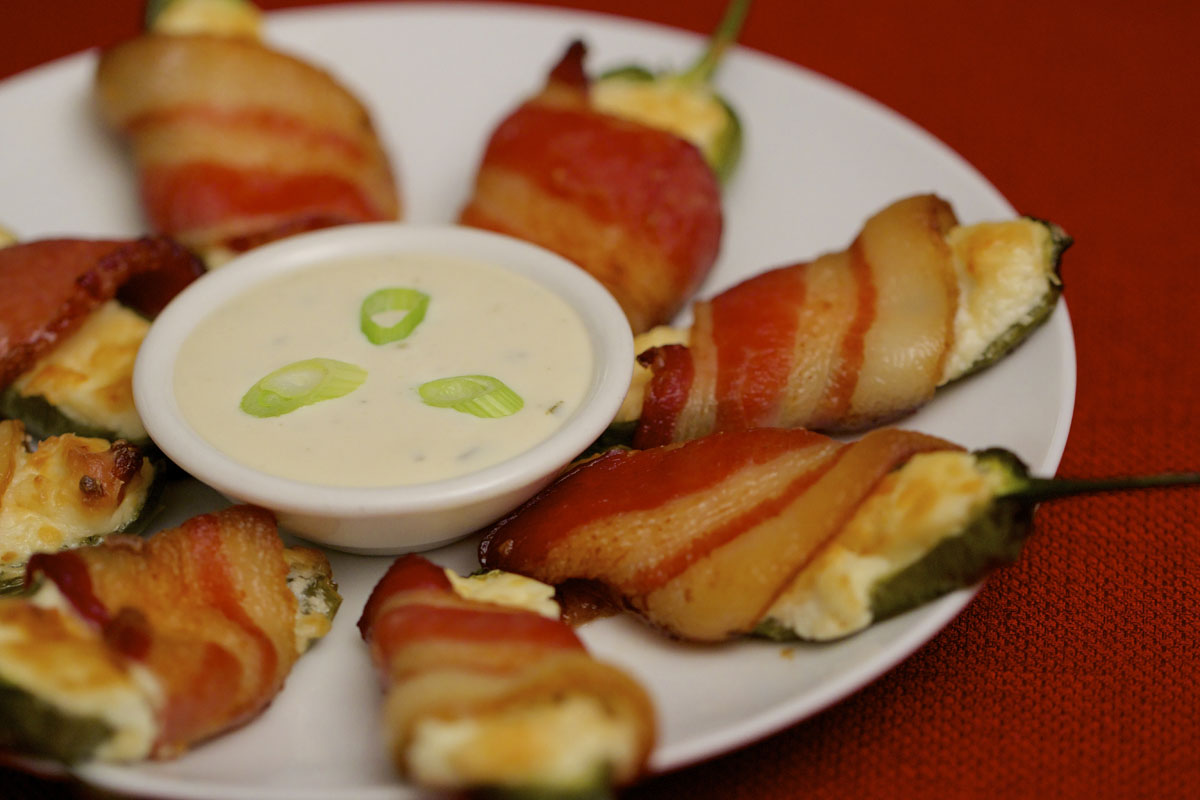 Perhaps you’ve noticed a trend by now on this website, but we are big fans of bacon and cheese around here. In this recipe, we take two kinds of creamy cheese and stuff ‘em into fresh jalapeños, wrap the whole thing in bacon and after a short time in your oven, you and anyone within “smellin’ distance,” are in for a spicy treat with these homemade bacon-wrapped jalapeño poppers!
Check Out the Recipe Download the Recipe PDF

No Replies to "A Garden Grows in Brooklyn"