Happy Friday! Welcome to a new series on The Saucy Spork called “Five Fun Food Facts on a Friday”. One Friday every month, I’ll be sharing a variety of random facts about food to lift your spirits while you wrap up your week and slip blissfully into your well-earned 48 hours of freedom. Check out this month’s fun facts below!

1. I’ve always had a healthy understanding that the Colonel’s secret recipe with eleven herbs and spices was kept under wraps, but I didn’t realize just how much. Before Harland Sanders died, he wrote down a full detail of the secret recipe and signed it. It’s now kept inside a safe within a vault at the KFC headquarters in Louisville, KY. Also included in the safe are eleven vials with the original spice blend inside. With a giant fast food chain like KFC, you’d think that someone else would have to have the recipe in order to keep up with the high production demands, right? Well, KFC actually has a safe guard in place where one manufacturer makes half of the recipe and another manufacturer makes the other half and the various restaurants mix the two together onsite. In a time where you can get information about virtually anything under the sun within a few clicks, it’s fun to know that there are still some well-kept secrets out there.

2. As it turns out, Nutmeg is good for more than a little sprinkling on top of your egg nog this winter. The tasty spice is also a mild hallucinogen. According to recent studies, if you eat enough of it, you’ll not only have an extra nuance of flavor in your creamed spinach, you’ll also find your spirit animal. Before you get too wild and crazy, though, it should be noted that the same portion of nutmeg needed to hallucinate is also the same portion that will give you nausea, diarrhea and a solid case of the sweats.

3. In the times before the Internet and television existed, say in times like the Dark Ages in the medieval period, people had to use their imaginations to entertain themselves. While I don’t necessary condone this type of mad-scientist-meets-bored-chef type of culinary tomfoolery, medieval cooks were quite fond of making odd animal pairings when their masters decided to throw large banquets. A popular dish of the time was a cockentrice, which is made by sewing the upper half of a small pig onto the bottom half of a capon or turkey. It should also be noted that the turducken was invented around this time. Evidently the folks of that time looked to mythological creatures for more than entertainment, but also menu ideas. I shudder to think of their other creations that didn’t make it into the history books. Manbearpig, perhaps?

4. The spice turmeric is loaded with health benefits. Native to Indonesia and southern India, the spice is prevalent in that region of the world and has been used an anti-inflammatory and anti-septic in Chinese and Indian medicines for centuries. In recent years, turmeric has also been acknowledged for its cancer fighting properties as well. Prostate cancer is now the second leading cause of cancer-related death of American men with a half million of new cases diagnosed each year. Conversely, it is a rarely diagnosed ailment for Indian men. Some say this can be, in part, attributed to the consistent use of turmeric in the Indian diet and cuisines. Madhur Jaffrey, also known as the “god mother of Indian cuisine in America,” has written several cookbooks on Indian food. I attended an event she was putting on earlier this week and she shared a personal anecdote about a time when her daughter badly cut herself in the kitchen and instead of going to the hospital, she just poured a bunch of turmeric on the wound and kept cooking.

5. Pythagoras was one of the earliest people in recorded history to be a conscious vegetarian. In fact, before the word vegetarian became widely popular and adopted into the cultural lexicon in the 1800s, people ascribing to an all-vegetable diet were commonly referred to as “Pythagoreans.” During his travels, Pythagoras was introduced to the idea of reincarnation when he met with the Brahmans. From then on he swore off the consumption of all meat as to not risk killing and eating a friend or family member.

Are you just dying for some more fun-filled alliteration using the letter F? Well then, feast your eyes on this featured fare of five fabulous, full-flavored, Fall-filled food feasts. I can guarantee you that these recipes will give you considerably more enjoyment than the past two sentences I have subjected your eyes to have. I promise it’s out of my system now. Well, that is until next month’s edition. See you in November! 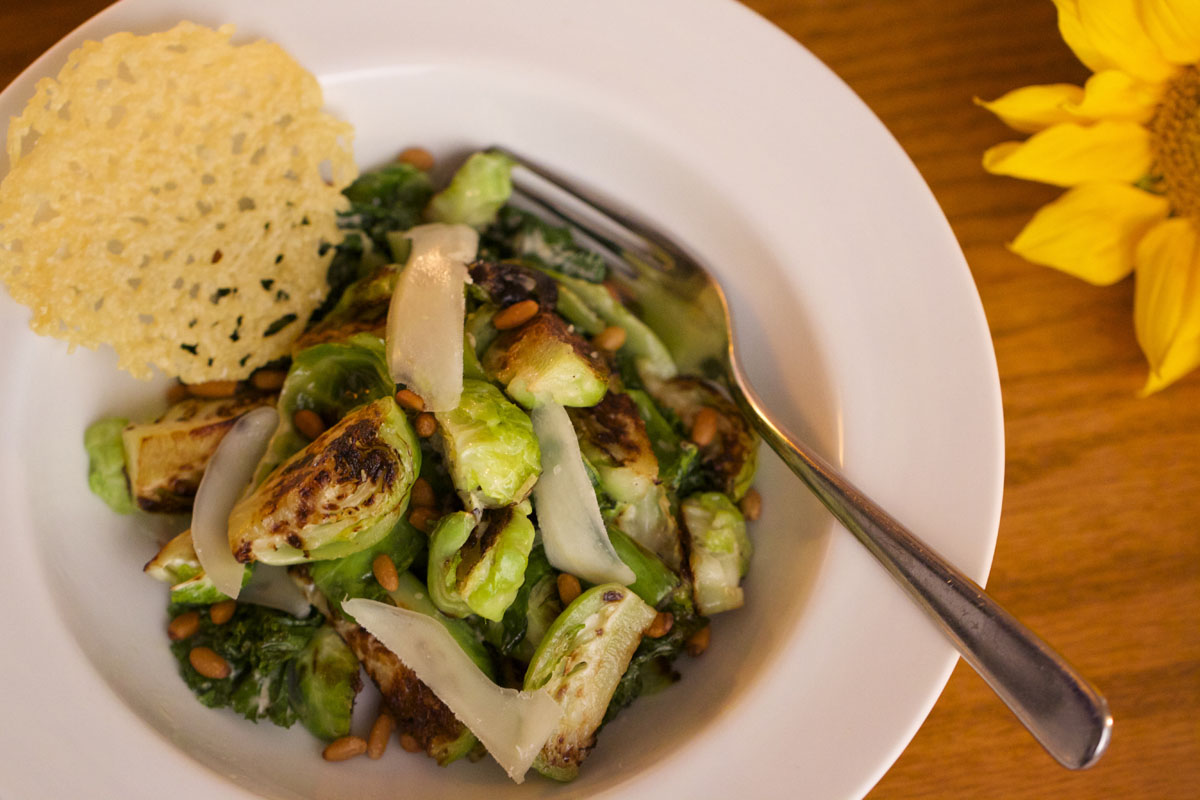 This Roasted Brussels Sprouts Caesar with Pine Nuts and Parmesan Crisps recipe is the perfect version of an autumn salad. It’s served warm to keep your spirits high as the temperature falls. The parmesan crisps and toasted pine nuts add a creamy flavor and a crunchy texture to the undeniably delicious combination of crispy kale and seared Brussels sprouts. Complex flavors run rampant in this salad that will have you coming back for more again and again!
Check Out the Recipe Download the Recipe PDF 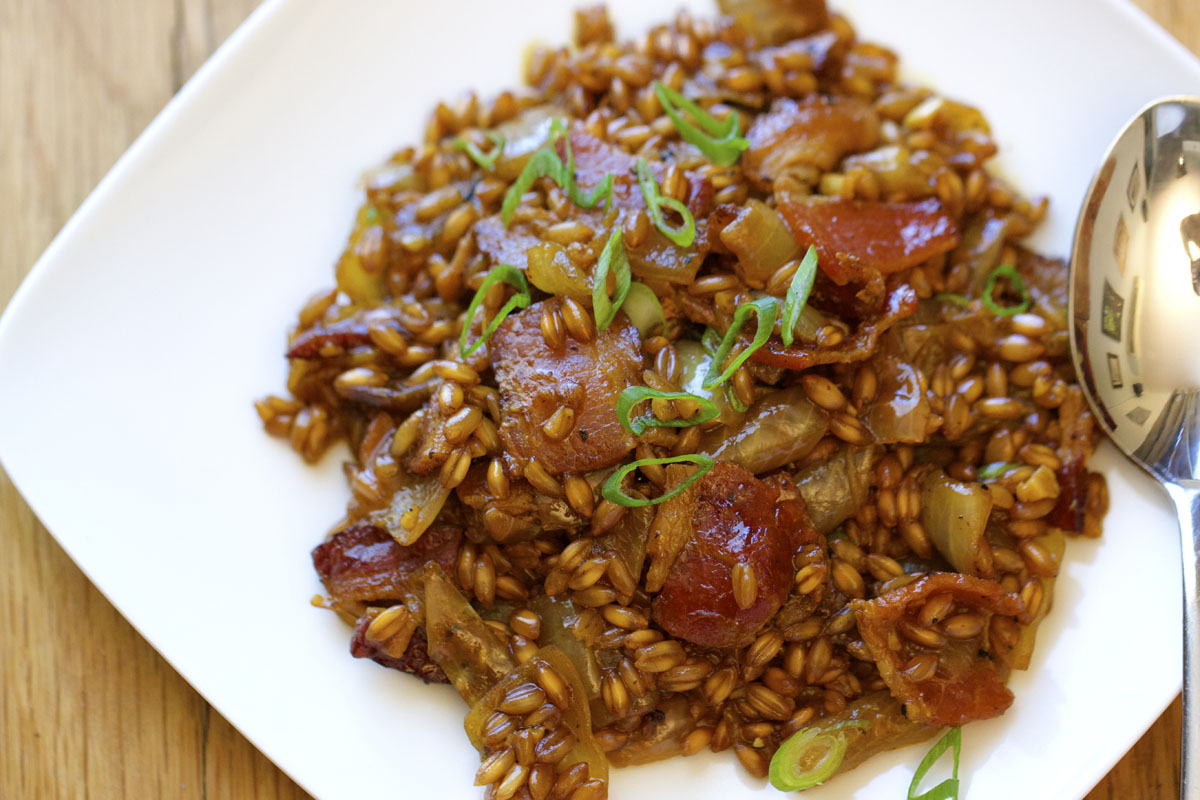 Spelt was one of the first grains ever eaten and grown by early humans. This Spelt Risotto recipe reveals that caveman foodies might have been eating better than you’d think. Spelt has a great texture and a complex nutty flavor that gets developed and enriched when cooked like a risotto. Caramelized onion and chunks of bacon are the perfect additions to this ancient grain.
Check Out the Recipe Download the Recipe PDF

Looking for a culinary weekend project? Give this Autumn Consommé recipe a shot and your efforts will be rewarded. This dish captures all that makes Fall wonderful – slow-cooked, caramelized flavors fashioned in a deep rust-colored broth that is as light as an autumn leaf that perfectly pairs with seasonal vegetables browned in butter. It’ll take all weekend to make it, but oh what a Sunday!
Check Out the Recipe Download the Recipe PDF 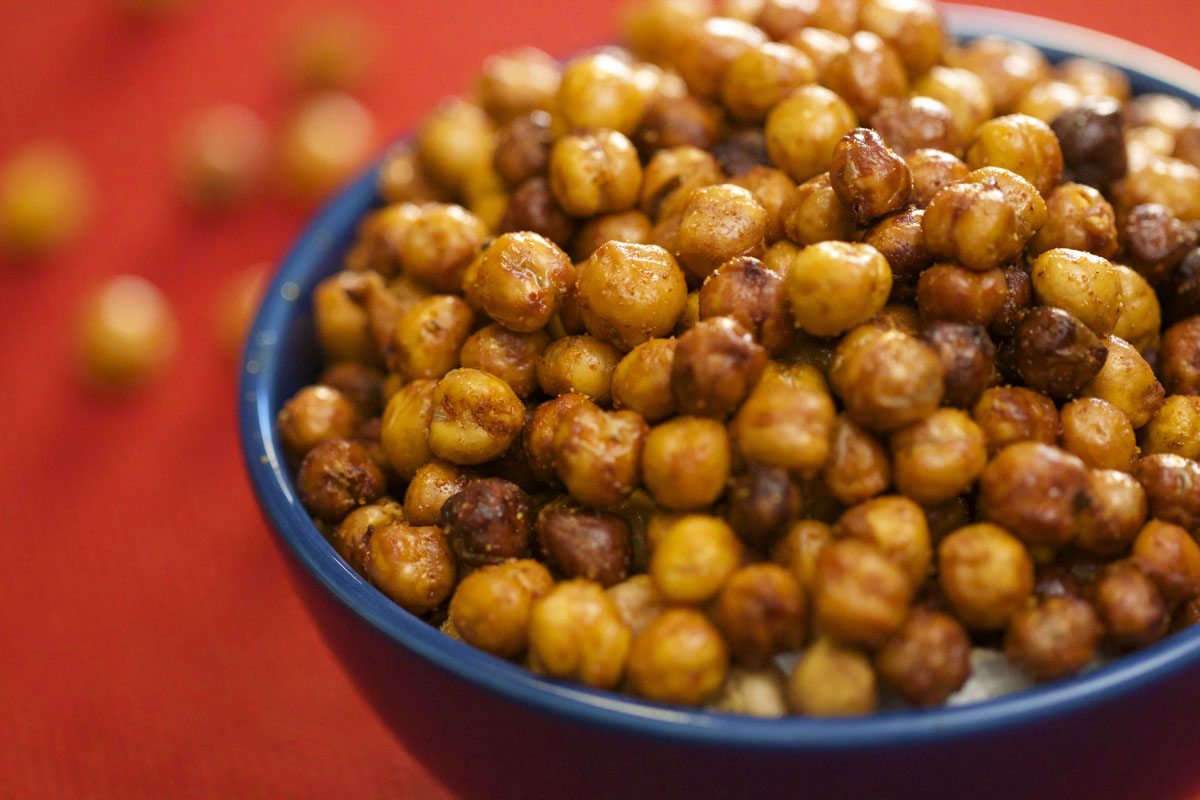 Looking for a healthy and flavorful snack with an addictive crunch? Give these Crunchy Roasted Chickpeas a try! The recipe is mostly hands off and can be easily made while you put together dinner or could even be made in the morning before you head out for a long day at school or work. These crunchy chickpeas are a great week to keep your energy up without packing on the calories.
Check Out the Recipe Download the Recipe PDF

Have you ever noticed that some of the best coffees have a nutty flavor to them? This Peanut Butter Mocha Parfait recipe captures the wonderful way in which the flavors of coffee and peanuts work together. And speaking of teamwork, we’ve added some chocolate to make a magical three part dessert harmony. These parfaits are a beautiful way to enjoy an incredibly delicious combination of flavors and textures!
Check Out the Recipe Download the Recipe PDF

No Replies to "Five Fun Food Facts on a Friday: October Edition"